The Republic of Slovenia is one of the youngest democracies in Europe, having declared independence from Yugoslavia in 1991. They joined the European Union in 2004.

Slovenia combines 4 major geographical regions, the Alps, the Mediterranean, the Pannonian Plain and the Karst dotted with caves and underground rivers. The changing landscape is breathtaking and invigorating.

Slovenes are diligent and hard working and are high achievers at the global level especially in athletics, rowing, skiing, swimming and ultra marathon biking. Slovenia is one of the most successful countries in terms of sporting achievement with a mind boggling 73 Olympic medals to their credit!

FRANCE PREŠEREN is possibly the most famous Slovene, the father of Slovene literature and author of the Slovenian national anthem the ZDRAVLJICA pronounced ‘draavilyica’. What Shakespeare is to the English, Prešeren is to the Slovenes. His presence is everywhere in squares, streets, banknotes, theatre and on two euro notes. February 8th is Prešeren day.

Slovenia’s greatest natural treasure is the magnificent Triglav National Park in the Julian Alps consisting of pure waters, deep gorges, remains of virgin forests and rich biodiversity. The Park has been named after the highest mountain peak in Slovenia – The Triglav with an elevation of 2864m, a pre-eminent symbol of the Slovene nation and featured on the national coat of arms and the national flag.

Majority of Slovenes have climbed Triglav at least once in their life and there is also a story about one guy who climbed Triglav every single day for a year and continued climbing until he had done it 888 times!

Bled gets its name from the Lake Bled, a spectacularly beautiful glacial lake surrounded by forested slopes

Lake Bled pretty as a picture!

In the centre of the Lake, is Slovenia’s only island with a charming small Church called Church of the Assumption of Mary dating back to the 1400s, a popular picturesque spot for local weddings. The island can be reached in a Pletna Boat – a traditional flat bottomed wooden boat made by locals, the origins of which go back to 1590.

view of the island from the top of Castle Bled

Overlooking the Lake, perched 100 m high above on a precipice is the iconic Bled Castle. There are hundreds of castles all over Slovenia each with its own unique history. Bled Castle is the oldest, believed to be a thousand years old. There are breath-taking views of the surrounding Gorinje countryside and the mountain ranges of the Karavanke and Julian Alps.

the gorgeous view from the castle with The Toplice overlooking the lake in the foreground, and the rolling hills in the background.

At night it’s a magical sight, of the lit up castle surrounded by the gleaming waters of the Lake. You are transported to a fairytale world.

The trek upto the castle! The surroundings are so gorgeous that you dont realise how steep it is! 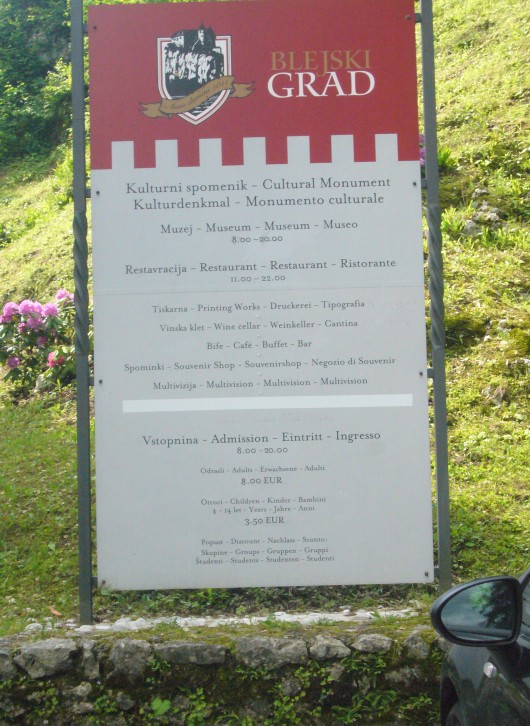 On the way to Bled Castle. castles are called Grad in Slovenian 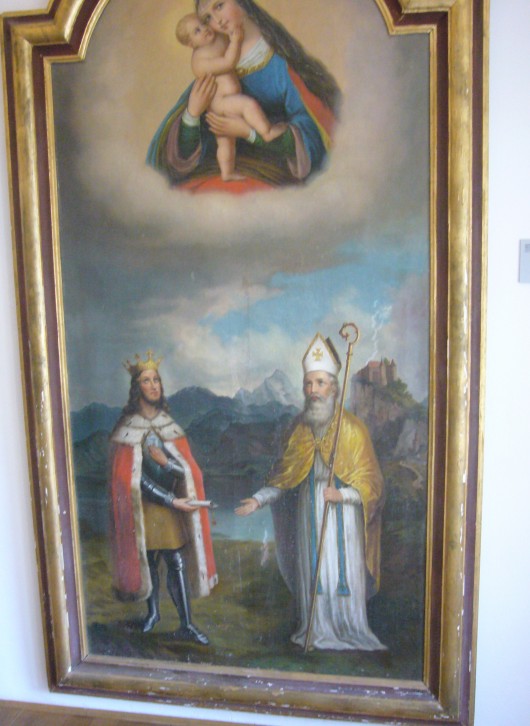 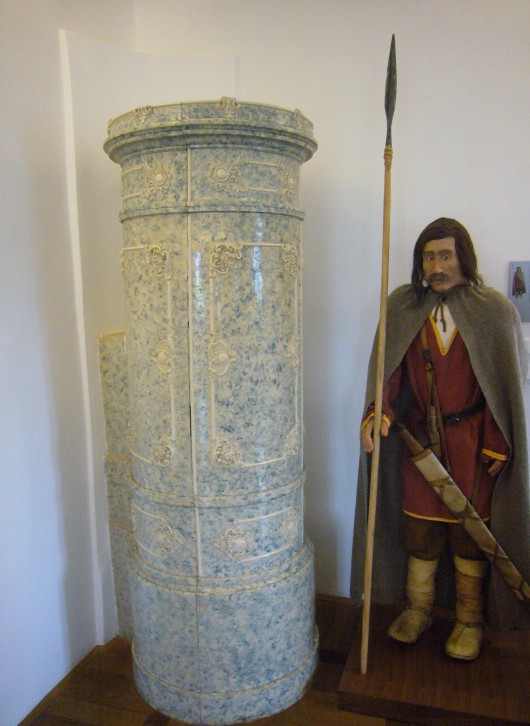 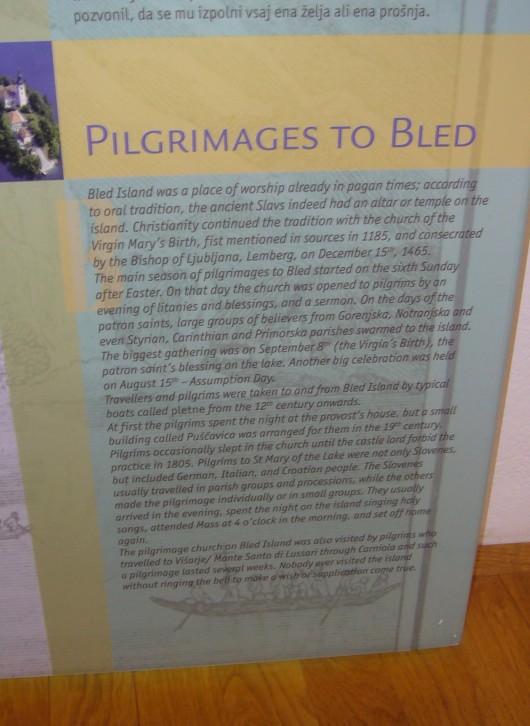 19th century bathtub made of zinc!!!

At the entrance to the castle is a Gutenberg Press!! an unbelievable sight! and it works. They print out small things on your request for a token sum.

The Gutenberg Press…
transported back to the Rennaissance!!!!

I stayed at the iconic Toplice Hotel which has seen several  stars, during its long history, both Hollywood, and political!!

Breakfast at the Toplice everyday was a wonderful start to the day because the dining area overlooks the lake.

beautiful chandelier in the dining room at Toplice

The town of Bled is centered around the Lake and castle. The whole atmosphere of the town is relaxed and laidback. There is also a pleasant surprise in Bled in the form of an upmarket restaurant with an Indian twist, called Okarina. They have a wide selection of Indian delicacies from samosas to rogan josh, amongst other cuisines. 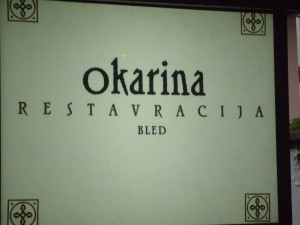 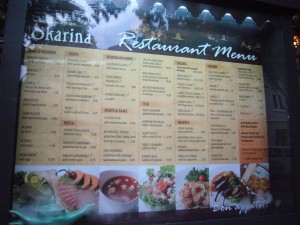 Of course, no, one can leave Bled without trying the Kremšnita or cream cake – an irresistible combination of cream, vanilla and a hint of rum! 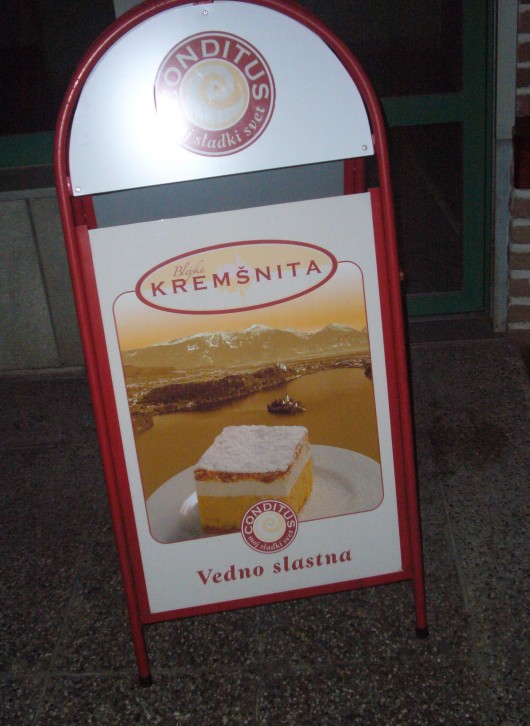 Vintgar Gorge is one of the most awe inspiring natural sights in Slovenia just 4 km from Bled. A wooden walkway leads past picturesque rapids, pools and rocky crags to a 16 m high waterfall called Sŭm, said to be the highest fluvial waterfall in Slovenia.

A lovely half hour drive from Bled leads to the charming town of Radovlijica. 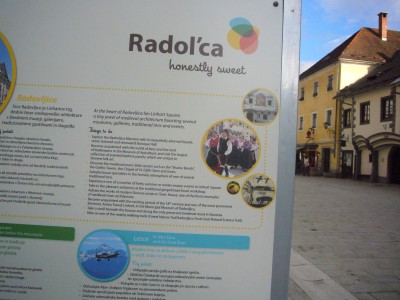 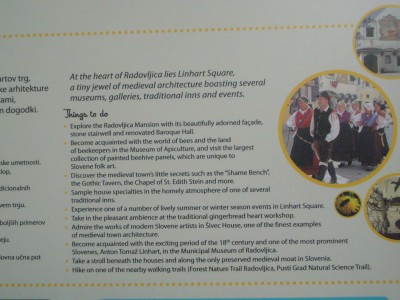 Linhart Square, named after Anton Linhart considered the father of Slovene theatre, and Radovljica’s most famous son, is the town’s main square, a pedestrian zone which is almost like a museum of historical buildings dating back to 15th century in different architectural styles.

In the heart of this square is a ‘living museum’, the Lectar Inn Museum where gingerbread is baked in several designs but mostly heart shaped called ‘Lects’, which is how Lectar Inn got its name. 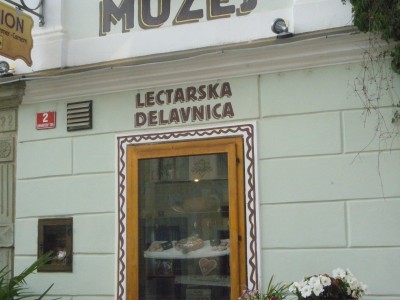 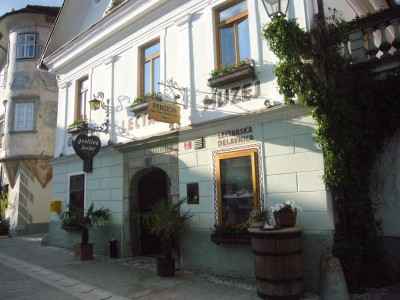 They are then painted red and adorned with colourful decorations. The paint is made from sugar, starch and gelatine. They make unique souveniers.

The museum is headed by Gostilna Lectar who dresses in medieval costume and uses 100 year old tools to bake the gingerbread. The recipe is of course a closely guarded secret. The moment you step down to the cellar where the museum is, you are transported back to medieval times. 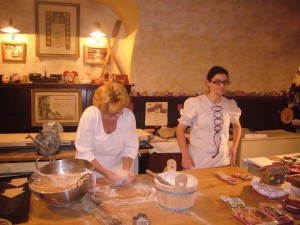 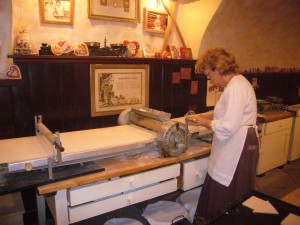 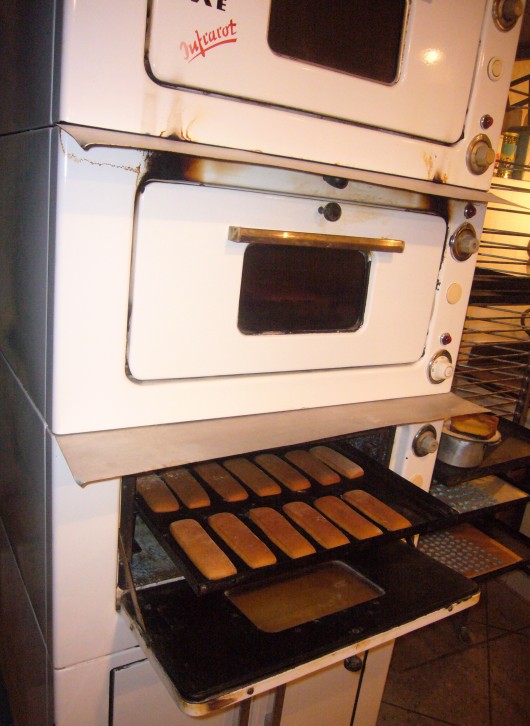 out of the oven

Less than half an hour’s drive west from Bled, is Lake Bohinj,Slovenia’s largest lake. Bohinj is pristine and tranquil ,surrounded by green forested slopes and quiet villages.
Above Lake Bohinj, lies the Vogel ski resort, one of Slovenia’s premier ski resorts. The ski centre is accessed by a cable car taking you from the valley floor up to the mountain in 4 minutes, with stunning views in all directions. 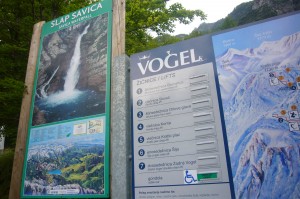 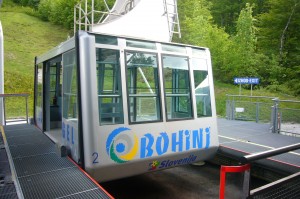 View of the lake from the cable car

View a little higher up

Its not ski season, so the restaurant is deserted

The Parish Church of St. Martin is another distinctive structure of Bled, with marvellous Gothic architecture and frescoes by noted Slovene painter Slavko Pengov. The most incredible frescoes are the ones that depict the Lord’s prayer ‘Our Father’, each line of the prayer having a separate fresco. The colour scale is intense and it is an incredible sight.

Ljubljana is the vibrant and trendy capital of Slovenia, derived from the Slovenian word Ljubljena meaning ‘the beloved’. There are numerous picturesque bridges across the Ljubljanica River the most famous being the Dragon Bridge, which is also one of Ljubljana’s best known landmarks, and the much celebrated Triple Bridge, executed by Jože Plečnik, the most famous son of Ljubljana who put his personal stamp on a large part of his native city.

Cultural activity is a way of life in Ljubljana, each year more than 10,000 cultural events including international festivals are hosted in the fields of music, theatre and fine art. The present Slovenian Philharmonic is the successor of the Academia Philharmonicorum established in 1701. The building still stands today, with a rich and vibrant history and several distinguished members, amongst others, Gustav Mahler who began his career as a conductor in Ljubljana. 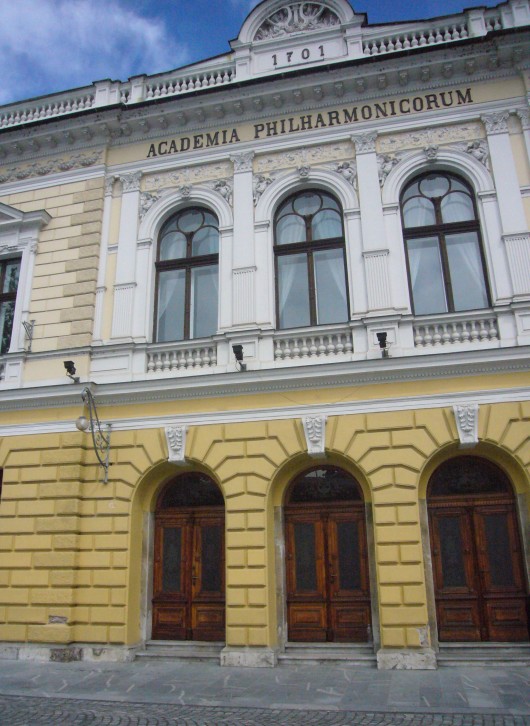 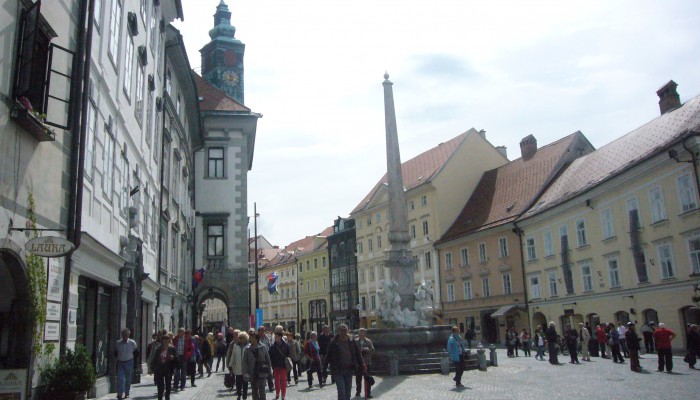 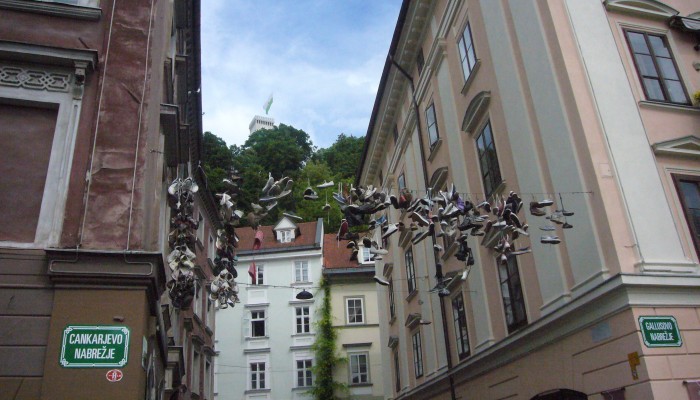 The very interesting facade of the Parliament house. Ljubjana 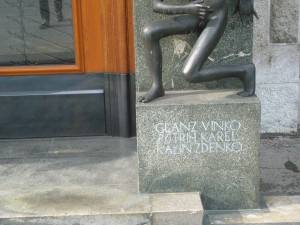 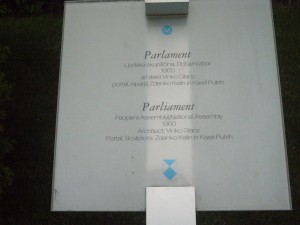 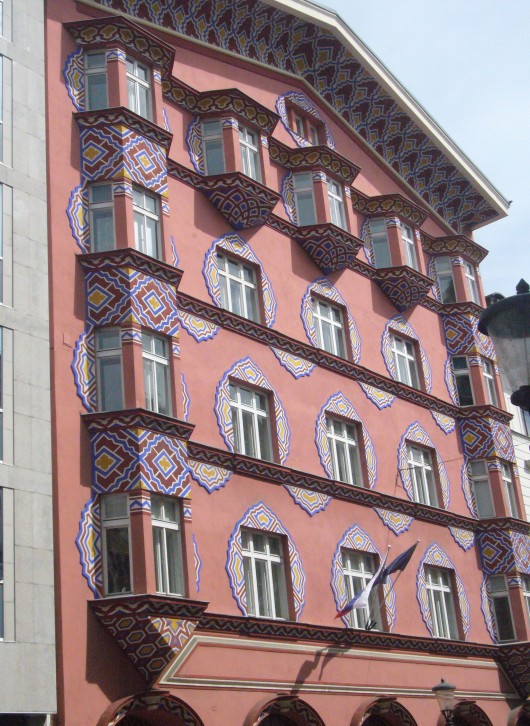 The centrepiece of Ljubljana is undoubtedly the 15th centuryLjubljana Castle built by the Hapsburgs as a defence against Turkish invasions. After a long and varied history, in 1905, the castle was purchased by the municipality of Ljubljana in order to be used for cultural purposes. Extensive renovations started in the 1970s and still continue. Today, the quintagonal, irregular layout is a picturesque venue for concerts, theatre performances, exhibitions, official receptions and also weddings.

Ljubljana is the only city in the world where the US and Russian embassies are situated adjacent to each other.

Slovenians always serve drinking water along with coffee as they believe that coffee is very dehydrating.

Slovenian is one of the few languages in the world which uses the dual, along with singular and plural.

The caron placed over the letters C, S and Z as in Č, Š and Ž are letters in their own right