As Valentines Day approaches, here’s a look at the flip side;

what happens to the shared possessions that become the casualty of a relationship that has ended?

thats what The Museum of Broken Relationships is all about!

The entrance to the Museum

This unique, award-winning museum tells us a universal human story about love and heartbreak.

Its certainly the most unique museum that I have ever seen!!

The museum was conceived by artist Drazen Grubisic and film producer Olinka Vistica, when their own relationship ended in 2003.

As they went through the process of separation, they could’nt decide who should take possession of a toy bunny they shared, which had a special meaning for both of them. They joked that they should start a museum that could store the bunny and other special objects from their relationship.

Three years later, in 2006, the joke became a reality and they decided to start a museum together, to house objects from people’s breakups. They reached out to friends who donated items that were symbolic of their broken relationships, accompanied by a story that explained why it was important.

The most banal of objects had a story to tell. The initial temporary display in 2006 was such a success  that they travelled the world organising exhibitions and were spectacularly popular wherever they went.

In  2010, they set up the permanent museum in Zagreb, the only privately funded one in the city. Inside the museum, the walls are all white, and the items rest on white pedestals. The lighting is soft and the atmosphere is subdued and solemn. The owners have limited the display to about 100 items because they feel that more items would dilute the impact. 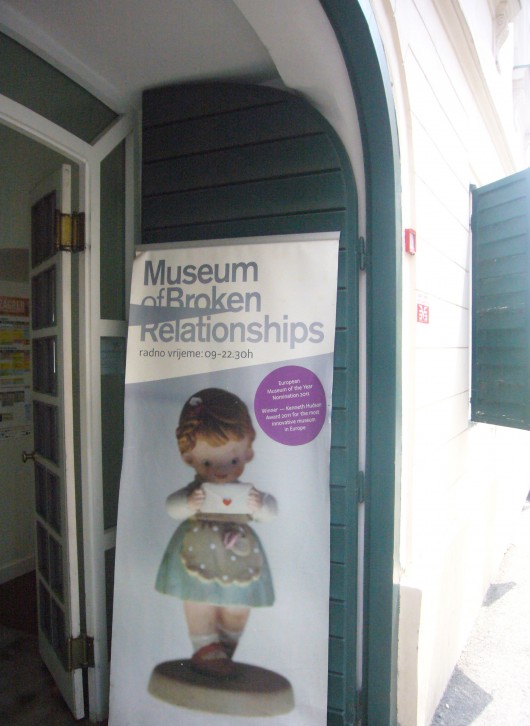 Visitors are not allowed to take photos of the objects on display which I respect.

What is unique about the museum is the premise on which it exists, that of using creativity to overcome the pain of  love and loss. The museum’s collection is composed of  evocative objects of no apparent value in a material sense, like a key, a vase with shards of broken glass, an axe, and several other objects which are displayed anonymously by using the personal stories of their donors as the only text.

Their value lies in the poignant, ubiquitous human stories of love and angst.

Soon , an assortment of cathartic objects of lost love became the foundation of a museum that disseminated a collective emotional heritage which found resonance with people all over the world.

Heartbreak is is universal, it recognises no borders;  political or cultural.

Vistica and Grubisic feel that it was a good idea to preserve the meaning of love and offer people some kind of positive ritual after a breakup, rather than encourage negativity.

Human society has marriages, funerals,graduations and christening ceremonies, but there is no formal recognition of the demise of a relationship despite its strong emotional effects.

The exhibits are as diverse as the people who have donated them. Their stories are angry, sad, bitter-sweet, heartwarming, hopeful, amusing. The displays are emotionally charged, reflecting moments of love, hatred,fun, as well as steps towards healing. There are some objects that are just so simple yet so hard to comprehend the feelings involved.

The museum’s capacity to inspire cross-cultural compassion and understanding was fulsomely praised by the European Museum of the Year Award Jury, who rated the importance of public quality and innovation as fundamental elements of this museum when awarding it the Kenneth Hudson Award in 2011.

The museum has challenged the common perceptions of the role of museums in society , and is a beacon of hope , resilience and inspiration. It is unique because the visitors are also the creators and curators.

The busy main square in Zagreb