The BhagvatGita  in chapter 2 verse 58 , says that one who is able to withdraw the senses from their objects just as a tortoise withdraws its limbs into its shell, is established in divine wisdom.

The tortoise is next to the cow among non-human living beings in possessing the ability to attract larger amount of Sattvik waves from  the atmosphere.
The tortoise is the second Avatar or incarnation  of Lord Vishnu : the Kurma Avatar.

The story goes that Mahavishnu appeared in the Satyuga as a tortoise to save the earth from destruction, by carryingthe mount Mandara on his back.

Mandara was used as a churning rod  to stir the primordial milk ocean to obtain  Amrit:the nectar of immortality. This process is known as the AmritManthan. 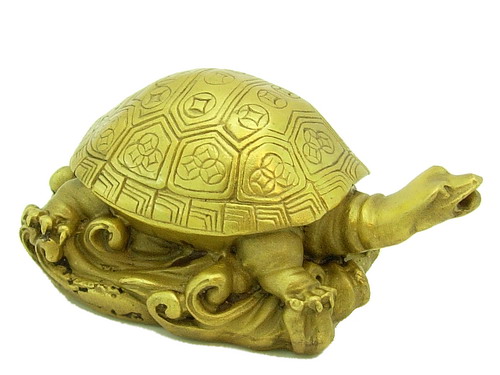 The devas continued with their churning and eventually , fourteen precious articles appeared on the surface including among others, the Parijatatree which granted boons, the elephant Airavat, the Moon , which Lord Shiva took to adorn his head, Kamadhenuthe cow that fulfills all wishes and most importantly Goddess Lakshmi .

The last precious article to emerge from the ocean was  Dhanvantri the lord of physicians who carried a bowl of Amrit: the nectar of immortality. Thus the power of immortality remained in the hands of the gods due in no small part to the Kurma.

AlthoughKurma is not widely worshipped, in Hindu cosmology he is still acknowledged as an important figure . It was only because of Vishnu’s incarnation as Kurma that the cosmos was blessed with a wonderful bounty that includes several important mythological figures . Most importantly, Lord Vishnu was united with Lakshmi who is the most widely worshipped goddess in the Hindu pantheon.

The only temple in India where Lord Vishnu is seen in Kurmaavatar  is the Sri Kurmanadha temple in Srikakulam , Andhra Pradesh.

The tortoise represents stability and longevity and is likened to a sage because it can withdraw into its shell and meditate.

Vastu believes that tortoise attracts harmony, money peace and long  life in a home. The figure of a tortoise should always face East and should be kept in sufficient water to soak the feet. Tortoise figures can be made of wood, crystal, or earthen material like mud or resin.