What can I write about Dubrovnik that has not already been written by hundreds of writers in as many years – beautiful, pristine, inspiring and described as paradise by George Bernard Shaw. I fell in love, completely and irrevocably, with Dubrovnik, as have several others before me.

Dubrovnik is a city with a history stretching more than a thousand years back in time. It is at the southernmost end of the Croatian Adriatic coast, with a treasury of rich cultural heritage, balmy Mediterranean climate and warm hospitable people. It is a city to be experienced, each street, square, museum, church and monastery tells its own tale. The one common thread in all these tales is -freedom. Above the entrance to Fort Lovrijenac is a Latin inscription saying ‘freedom cannot be sold for all the gold in the world”.

Originally named Ragusa, the city’s history began as a Roman settlement and for centuries it was a prize sought by Venice, Hungary, Turkey and others. Yet time after time, Libertas- the people’s strong feeling of independence, triumphed over other nation’s plans to conquer the city

The medieval city walls are the most telling symbol of Dubrovnik’s freedom. 1940 meters of stone walling ,including towers, forts, bastions, encompass the city

The medieval city walls are the most telling symbol of Dubrovnik’s freedom.  1940 meters of stone walling ,including towers, forts, bastions, encompass the city.  One of the most beautiful and powerful fortification systems on the Mediterranean, it was systematically built and reinforced from the 13th century onwards

The wall encircles the city as an irregular parallelogram on whose outstanding points stand strong fortresses.  To the North is the round, monumental, iconic Minćeta tower built in the 15th century – which has become a popular symbol of Dubrovnik today.

To the East is the mighty independent tower of Revelin also built in 15th century to defend the Pile gate and the harbour.

To the Southeast  is the fortress of St. John built in 16th century, which was the main defense of the city harbour and the Arsenal where ships were built and repaired.  Today it houses the Maritime Museum and the Aquarium.

To the West is the tower of Bokar also of 15th century.  Opposite Bokar, the impressive self-standing tower of Lovrijenac, with a triangular ground plan and three terraces with powerful parapets turned to the open sea.

Revelin is a venue for concerts during the Dubrovnik Summer festival.  Lovrijenac provides the most beautiful stage for the traditional,celebrated performance of Hamlet during the festivaleach year.

The most striking feature of Dubrovnik is its immaculate cleanliness.  The nightly hosing with water keeps the streets and buildings impeccably clean and a ban on excessive advertising preserves the medieval ambience

Museum where time can easily fade away.It is completely a pedestrian area spellbinding in its charm. 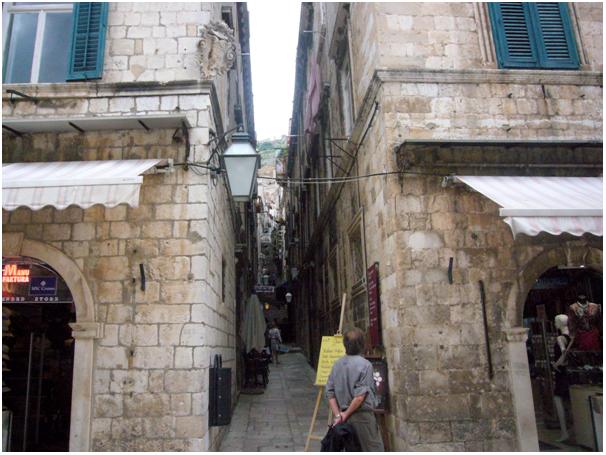 Part of the old town with narrow alleys between buildings 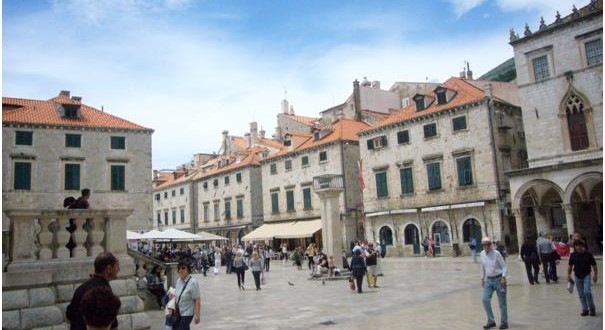 The main square in the old town

Ancient churches, monasteries and public buildings blend seamlessly with green shuttered stone houses and the limestone cobbled main street – the Stradun , polished a pearly white over the centuries by pedestrians and lit at night by octagonal wall lamps, transports one back to the 15th century. 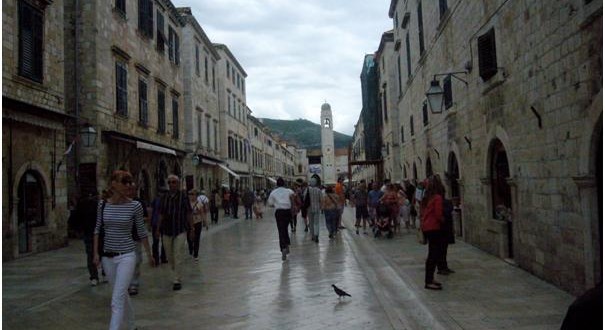 It is impossible not to walk down the Stradun and not feel drawn to the sheer beauty of its unique history. The Stradun connects the Pile Gate to the Ploce Gate as well as the old harbour. It is the main business street of the old city and is lined with shops, cafes and bars. 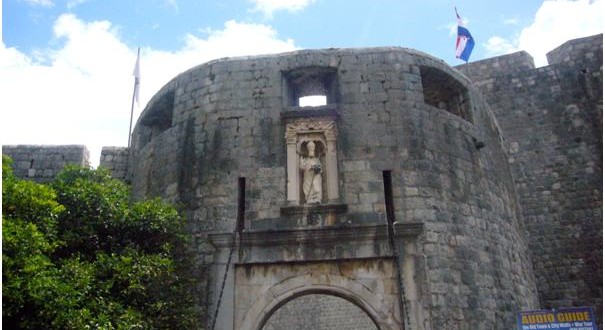 The Pile Gate is the main entrance to the old town.  The stone bridge leading to Pile Gate is from 1537.  The bridge crosses a moat which is now a garden and in a niche above the arch of the interior gate is a sculpture of St. Blaise who is the patron saint of Dubrovnik,who also has a beautiful church in his honour.  Incidentally, there is also a small Church in Goa of St. Blaise – probably descendants from Dubrovnik! 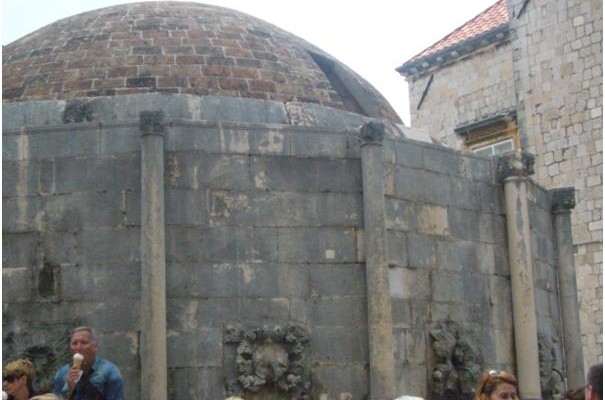 The Large Onofrio Fountain is situated in the square which opens out immediately after the Pile Gate.  The large Onofrio is the work of celebrated architect Onofrio de La Cava from Naples.

Around the impressive carved centre, there are 16 little fountain jets of pure water.  It was erected as a celebration of the completion of new waterworks in 1438 .

Behind the Large Onofrio fountain is the Convent of St. Claire, built in the 13th century, the best known of 8 convents in Dubrovnik, where daughters of Dubrovnik noblemen used to commit themselves.  In 1432, Dubrovnik authorities founded here a permanent Home for Foundlings, one of the first in Europe.

Opposite the Large Onofrio is the small votive Church of St. Savior built in 1520 as a sign of gratitude for salvation from an earthquake the same year.  It has been described as a ‘pearl of the Renaissance style’ and is the work of the Andrijić brothers, master builders from Korćula.  On the high alter can be seen the painting “Christ’s Resurrection” by Pier Antonio Palmirum from 1527. 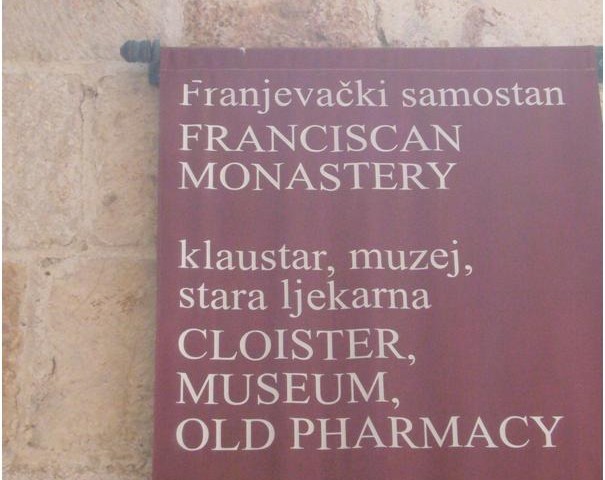 Entrance to the Monastry

The Franciscan Monastery – one of the most important buildings in Dubrovnik and along with the Dominican Monastery, a cultural, artistic and historical legacy of Dubrovnik.  The construction of the Franciscan monastery began in 1317 and lasted several years, before it was destroyed in the earthquake of 1667, leaving only the exquisite sculpture of the Pieta which still stands today.  The Church was rebuilt by the Petrovic brothers in 1499.  The monastery cloister is one of the loveliest structures in Dubrovnik with an ambience of exceptional peace in spite of the crowds.

One side of the cloister houses the pharmacy founded in 1317, still in use, where mortars, measuring apparatus, beautifully decorated jars are displayed on old shelves. 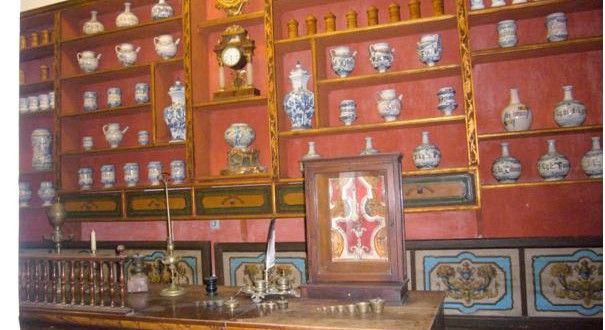 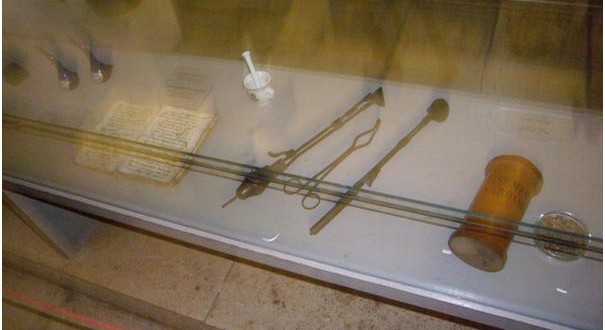 The monastery library one of the oldest in Europe and the world, has over 1200 old manuscripts of unmeasurable cultural and historical value amongst other unique items.  The Museum  includes a complete collection of the inventory of the old pharmacy, precious gold and silver artefacts, old vestments of Mass, paintings of old Italian, Dutch and Dubrovnik masters from 16th to 18th centuries. 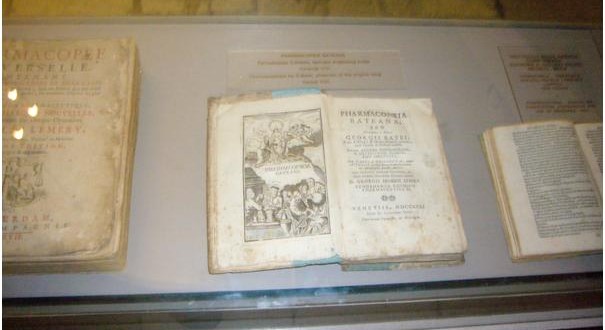 The Dominican Monastery – constructed gradually from 14th 16th centuries, is one of the loveliest architectural monuments of Dubrovnik with an interweaving of Romanesque, Baroque, Gothic and Renaissance styles.  It has a very rich collection of art, a precious museum collection of Church artefacts and several valuable manuscripts. 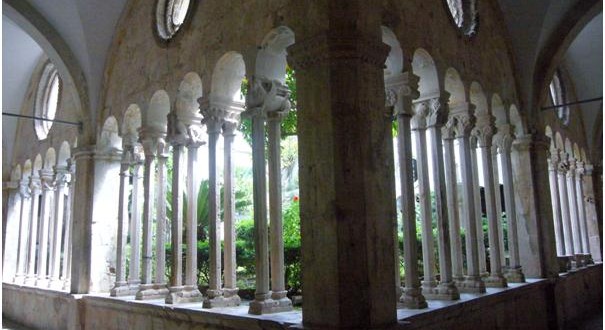 Exquisite symmetry of the columns in the Rector’s palace

The Rector’s Palace –built in the 15th century was the seat of local government, a simple but exquisite Gothic –Renaissance palace. One of the most important buildings in Dubrovnik,it experienced a stormy history of gunpowder explosions and earthquakes, but stands today ,it’s  façade emitting  a luxurious glow of peaceful beauty .The spirit of the past is so strong that one is enveloped in the atmosphere of centuries gone past and almost expect the Rector to appear in one of the corridors! Today it is a museum with an astonishing collection of paintings by the great masters, coins dating back to the 14th century, original keys of the city gates, seals ,amongst several other remarkable things. 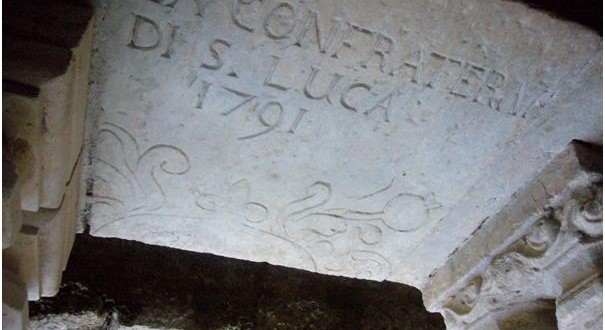 Gravestone in the Rector’s palace 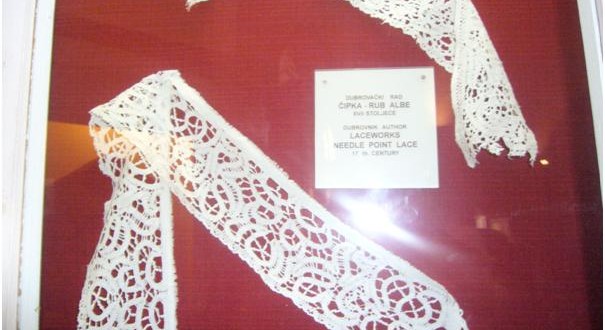 The original votive cathedral constructed with a donation by English King Richard- The Lionheart in 1192 was destroyed in the earthquake of 1667. The reconstruction was finally completed in 1713, and today, this is one of the most beautiful Baroque churches in Europe,it’s blue-green dome dominating over the city roofs. It contains several priceless artworks,and invaluable gold and silver artefacts.

There are several more ancient churches, monuments and buildings all of which sadly, cannot be  described here. This great city clings to it’s traditions, but in spite of it’s compelling historic ambience, it is a cool and classy destination favoured by several Hollywood A-listers like Beyonce and JayZ , Tom Cruise, Owen Williams, to name a few.